The third AILI intensive course was held at Charles Darwin University’s Casuarina campus from July 8-19. While we originally offered a choice of three courses, for various reasons we only ran ‘Linguistics for Indigenous Languages.’

Three recipients of AILI Travel Scholarships (funded by an Indigenous Languages and Arts grant) attended the course, plus one other student. Other scholarships were offered but unfortunately the timing wasn’t right for some people and they couldn’t make it.

Sylvia Tkac is a Warnindilyakwa woman who is an experienced interpreter with the NT Aboriginal Interpreter Service, and previously worked at the Groote Eylandt Language Centre. Mandy AhMat is a Bardi woman with connections to Roper who works as a trainer at the Interpreter Service. Dianne Ross-Kelly is a Kuku Yalanji woman from Cairns, who works as a language support officer at the North Queensland Aboriginal Language Centre. Emily Ford is a Rak Mak Mak Marranunggu woman from Darwin who is involved in language revitalisation for her community around the Finnis River region. She also writes the ‘Language with a Local‘ column each month for Off the Leash, so now has lots more ideas for her column! 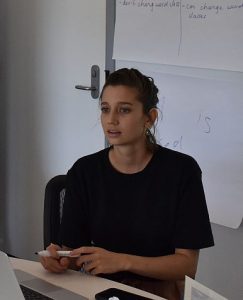 The course was taught by Jackie van den Bos, who studied Linguistics at the University of Queensland. More recently she was the coordinator of the Ngukurr Language Centre. She made the course a journey of discovery as the learners engaged with what they knew of English and Indigenous languages, and used their existing knowledge to explore concepts of linguistics.

They had some visitors during the course, as staff from Batchelor Institute explained some of the pathways to continuing to study Linguistics. All the students were keen, so we look forward to seeing them back here in the future. Another visitor was Angelina Joshua, who shared from her experience as a language worker at the Ngukurr Language Centre.

During the first week they also attended the Northern Institute’s NAIDOC week Indigenous Language and Research Forum. They heard about some of the fascinating work being done in language right here at CDU. This included Emily and her family talking about their work on dictionary making.

Jackie said after the course “It was great to have people from different backgrounds – language centres, interpreters, trainers, researchers. This created a very supportive environment, where everyone helped each other on their learning journey.

“It was particularly enjoyable to help make linguistics and learning languages less intimidating. We were able to explore topics like phonetics, morphology, and syntax, and to apply these to language learning using Kriol and people’s own languages.”

Here’s what one of the participants had to say about their experience:

This is a great course to learn about what linguistics is. It takes concepts that may be a bit complicated and delivers it in a way that is understandable and interesting. It is a great course if you would like to learn more about linguistics, what linguists record about a language, how to read materials made by linguists, and about your own languages from a different perspective.

Here is an amazing resource on digital technology, thanks to joint work of the Gwich'in Tribal Council and the University of Alberta. The link includes student and facilitator workbooks. Hą̀į’ choo to all involved! http://firstmile.ca/new-digital-literacy-resource-eetsii-tthak-tagwahii-getrootanahchah-digital-content-and-connectivity-with-dinjii-zhuh-contexts/

Another fantastic year of Pitjantjatjara Yankunytjatjara language and culture summer school at ⁦@UniversitySA⁩
I always learn so much from the Anangu tutors and love seeing where the students get to after two weeks
#Rikina!

“Something that’s very essential for Aboriginal people is the total integration of language, land and people. In fact, they say that the language and the land was there before the people.”
https://www.rnz.co.nz/national/programmes/summer-days/audio/2018729812/reviving-aboriginal-language-through-literature-and-tech

Registrations are still open for next month's "Linguistics for Indigenous languages" course at @CDUni in Darwin next month 10-14 Feb. Apply now at https://webpay.cdu.edu.au/TopEndIntensive2020 for a fun week of discovery about our amazing #Indigenous #languages #linguistics